We have built three national networks and one local network (multiplex – MUX) for terrestrial digital television in the DVB-T standard with an MPEG-2 system for coding video content.

- coverage of over 98.5% of the population
- 4 national programming bundles transmitted

OIV’s entirely independent system of digital microwave links consists of over 300 individual links of varying capacity, through which we can provide the transmission of telecommunication content from any part of Croatia with very high reliability.

DVB-T2 (Digital Video Broadcasting - Terrestrial) is a system of transmitting television signals via digital techniques. The system is more resistant to signal interference and facilitates the reception of television signals at a considerable higher quality in comparison to the previous DVB-T digital terrestrial television signal. The DVB-T2 system allows for new additional services and functionalities such as searchable EPG, multi-channel audio, interactivity, coding, PayTV, and the further development of high resolution television.

The Republic of Croatia is divided into nine digital regions (Eng. allotments). Inside each allotment, transmission of the DVB-T2 signal is done using the SFN operating method.

Transition to the DVB-T2/HEVC television signal

We successfully implemented the national transition to the standard of digital terrestrial television with the most modern HEVC (H.265) system for video compression which should be finalized by the end of May 2020.

DAB (Digital Audio Broadcasting) is a digital radio platform and it constitutes the greatest progress in radio technology since the introduction of stereo FM.

Digital radio gives listeners the opportunity for interference-free reception of radio signals, the possibility of a greater and simpler selection of programming with pure audio and additional textual and graphic services which accompany the audio content available on fixed digital receivers and in motor vehicles. 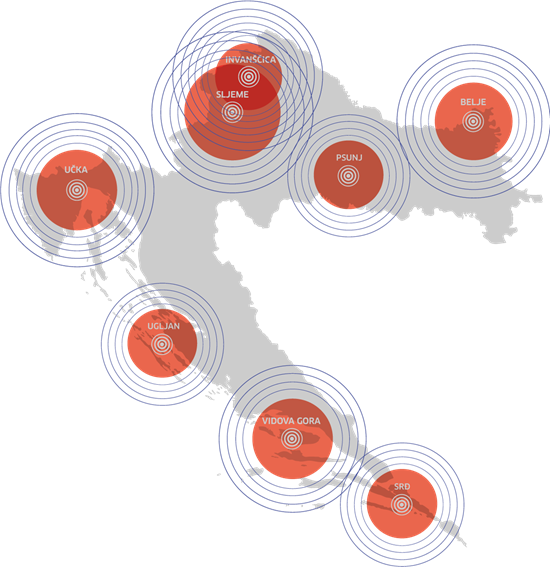 Map of coverage by the DAB+ signal in Croatia

Journaline – an interactive service with textual information similar to teletext on television which is accessed through a menu.

TPEG (Transport Protocol Experts Group) is a specification developed for transport and travel information (news, navigation, parking, fuel prices, etc.) which can send messages to drivers about traffic in their own language, even if they are abroad.

all new automobiles in the EU will have a DAB+ receiver

DAB+ channels can be broadcast over a single radio frequency

With 77 transmitter locations, we cover 99% of Croatia’s population with an FM radio signal.

We have transmitted radio programming on the FM band since 1957. We have developed and manage the following radio networks with concessions at the national level: HRT HR1, HRT HR2, HRT HR3 and HRT HR (Croatian Radio) locally.

We transmit terrestrial television and radio programming to Eutelsat 16A from our Satellite Centre at Deanovec.

Using our PlayOut Max and HeadEnd Max, we can convert television and radio programming from other sources (OTT, IP/TV, Cable or HTTP stream) to a DVB-S signal and transmit it to a satellite.

The content that we broadcast by satellite can be received downstream and forwarded for broadcasting via terrestrial signal (DVB-T2 or DAB+ for digital radio) or, as needed, to OTT, IP/TV or cable distribution.

From OIV’s Satellite and Multimedia Centre, equipped with 10 satellite transmission stations with dishes ranging from 2.4 to 7.6 m in diameter and over 20 satellite receiver dishes with diameters of 3.7 m and 2.4 m and with automated de-icing systems installed, we can transmit television and radio programming to any satellite visible from Croatian territory.

Broadcasting to satellites not visible from Croatia’s territory (e.g., satellites meant to cover the Americas or Australia) can be done through cooperation with our partners.

See the programming that we transmit via satellite and the map of coverage by satellite signal here.

Our services based on the terrestrial transmission infrastructure

Uncoded signal broadcasting service for publicly available free-to-air radio and television programming which users can access without a subscription.

A platform for terrestrial transmission of digital radio programming and sending of textual, graphic, pictorial and video data linked to audio content.

Satellite transmission services encompass uplink/downlink of television and radio programming as a part of our multiplexes on Eutelsat 16A or any other satellite.